Ashtabula Ohio and Pittsburghs Meeting of the Marked

Posted by david on October 19, 2011
Posted in: David Meek Tattoos, Meeting of the Marked. Leave a Comment

It seems as though there is never enough time in a day when you want to do something awesome. I feel like I am so behind on artwork and only have 5 days left til my journey begins. In case you don’t recall i will be headed to Ohio to tattoo a bunch of friends and get tattooed by my pal Kernal Tubbs. Then we will all be off to Pittsburgh to the Meeting of the Marked Tattoo Expo.  I have no appointments scheduled in Pittsburgh so come on by if you want to chat or get tattooed.

In other news i just finished my book that will be for sale in Ohio and Pittsburgh. Its titled Flora Pour Ehemplo, a sketchbook of Birth flowers and line drawings. Im super excited to have finally put this thing together after putting it off for over a year. It will be a limited to only 50 copies and will come with a limited edition print for $50. All books will be hand signed and numbered. I will also have a couple of oil paintings and limited prints for sale as well as a couple of wooden plaques and limited prints of those too. All limited art will be signed and numbered and never produced again. Once its gone its gone so be sure to grab some original art or limited prints while you can. 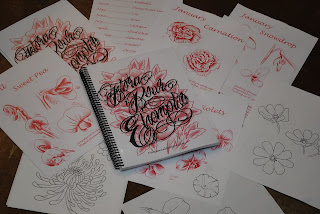 And another little side note. I haven’t confirmed it personally but I’ve been told that a skull rendering I did in the spring of 2010 has been included in the book Cranial Visions. If you don’t have it, get it. Its a great reference for skulls and I think I have a piece in it.

All in all Im just really excited to see and hang out with a bunch of good people, Johnny,Zane, Ken, Erich, Cooper, Tim, Seth, Joe, Kevin, and Nate. And anyone else that is awesome!! see youse guys soon!